How Much Did Psy Really Make? 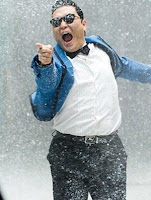 Everyone seems to be weighing in on how much K-Pop star Psy made with his global hit "Gagnam Style." According to numerous accounts, the 1.23 billion views earned a total of around $8 million on YouTube, in which Psy received $4 mil. But other sources seem to dispute this and say the overall take is much lower.

Indeed, you hear estimates that vary from $.05 all the up to $.65 per view, but NPR estimates that Psy's take was more like 4 cents per view. The fact of the matter is, any kind of digital stream monetization always seems to be a moving target so it's difficult to tell for sure, and just when you think you have a handle on it, everything changes yet again.

Then add to the fact that most videos don't start out using advertising, and only begin to employ it if it appears to be a viral hit. This can mean that quite a few million views go by the wayside earning zero because it took so long switch to the advertising model.

I don't know about you, but I personally hate ads on YouTube and will do anything to avoid them, especially the 30 second ones. 5 seconds I'll give you, but not much beyond that. Yet, I can't blame anyone for trying to monetize their art and create a new revenue stream.

All that said, you'd expect that over a billion views would generate well over the $8 million figure that's been thrown around. The real fact of the matter is that however much was generated, it's inconsequential to the overal income of Psy. Consider the billion views a huge marketing bonus, since Psy registered big dollars from worldwide concerts and television appearances. As always, your music is not your product - it's your marketing.