The 25 Highest Paid Musicians And What It Means For Music 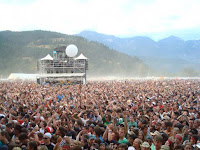 Forbes Magazine recently presented their annual financial ranking of musicians in their Celeb 100 issue, and while it may look as business as usual for a bunch of high visibility names, there's actually some good news for the music business in the numbers.

While the list has its share of the musical old guard with names like U2, Bon Jovi, Elton John, AC/DC and The Eagles, the good news is that there are so many newer and more diverse acts on the list than in recent years. That's especially good news for the concert business, who've been accused of recycling the same old acts because there were no news ones that could pack the house. Apparently that's not the case anymore as Justin Beiber, The Black-Eyed Peas, Michael Buble, Katy Perry, Taylor Swift and Usher prove that there are viable new acts that people will pay their hard-earned dollars to see. And while the charts seem to be dominated by women, gender-wise  that's not the case on the big stage, with only 5 acts being women. It's diverse too, with 10 rock acts, 6 country acts, 5 r&b/hip-hop acts and 4 pop acts.

Check out my Big Picture blog for daily discussion of music, recording, and production tips and tricks.
Posted by Bobby Owsinski at 9:35 PM