Best And Worst Times To Post On Social Media

There's no point in posting if no one is there to read it. Here's an infographic from socialcaffeine.com on the best and worst times to post.

These times are pretty broad, and you'll find more precise times for both networks in my Social Media Promotion for Musicians book.

For instance, I've found that Twitter posts at 8AM, 1PM, 3PM, and 5PM ET work really well. Dan Zarella has a wealth of information on the best times to post on his site if you need more info on the subject.

You can also read excerpts from Social Media Promotion for Musicians and my other books on the excerpt section of bobbyowsinski.com.

CDs Refuse To Die, And That’s Bad For The Music Business 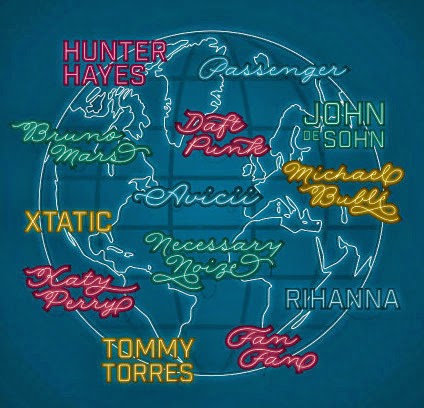 The 2013 global music industry revenue numbers are in courtesy of the IFPI (International Federation of the Phonograph Industry - an outdated name if there ever was one), and streaming is now a huge part of not only digital sales, but all music sales. According to its latest Digital Music Report, streaming and subscription services climbed 51% last year, which accounted for $1 billion, over 27% of the total digital music revenue. When downloads are taken into consideration, digital music totaled $5.87 billion in 2013, up from $5.63 billion the previous year, despite download revenues dropping 2.1%.

While streaming and subscription appear to be the immediate destiny of the music business, the physical product side of the business refuses to die. Despite predictions that the CD format would be just a memory by now, physical sales of $7.73 billion still made up 51.4% of the total global revenue. Granted, that amount was down 11.7% from the previous year, but a $7+ billion business segment is still substantial by any measurement you want to use. In fact, it’s decreasing at a much slower rate than anyone ever predicted, and actually even grew by 0.8% in France.

All that said, total global music revenue fell by 3.9% last year to $15 billion, most of which was due to a stagnant and slowly changing Japanese music economy, the second largest music market in the world. Japan still centers mainly around physical product, which took a big sales hit last year, while its digital sales have yet to gain much traction. Japan, along with South Korea, was dominated by local artists, who held the top 10 sales positions for the year. It’s not known if that might somehow be a factor in the 16.7% sales slump that occurred in 2013, but it does show that Japanese music consumers are beginning to exhibit their preference for other types of music delivery. Read more on Forbes.
----------------------------------
Help support this blog. Any purchases made through our Amazon links help support this website with no cost to you.

The latest IFPI report is out outlining the recording industry's health for 2013. We'll cover the numbers more in depth in a future post, but first let's look at the top global sellers of last year.

One of the things that sticks out is that the sales numbers for these hits are rather anemic when you consider we're talking world-wide. Also, when you consider the amount of hype that artists like Lady Gaga, Justin Timberlake, Beyonce and Daft Punk received, you'd expect the numbers to be much higher.

But that's the music business we live in today, where sales numbers aren't what they once were and probably never will be. That said, I bet if you look at the same artist's YouTube and streaming numbers (which I'll attempt to get), they'd be off the charts.

Sari Delmar wrote a great piece in Music Think Tank called "15 Quick and Simple Things You Can Do To Help Your Music Career." There are a lot of great ideas there, but here are the first 5.


#1 Remember Peoples’ Names
Ya ya ya, you meet a lot of people… we get it. If you want people to remember your name, you better sure as hell try to remember theirs. Find a good system. Make notes. Facebook stalk. Do something.
#2 Send Thank You Notes
A small and simple gesture that goes a long way to ensure you leave a great impression.
#3 Database Relentlessly
Keep organized and detailed databases of your mailing list, the local media, your supporters, promoters, and everything else. This will save you tons of time and help you manage relationships with ease. There’s a kazillion great databasing tools out there and a simple spreadsheet does the trick as well.
#4 Role Play
Now this is a fun one! As an indie band you often need to wear a number of different hats. One minute you are a publicist, the next you’re an agent, and the next moment you’re a merchandiser. It can happen so fast sometimes it’s easy to forget the intricacies that make each of these professionals so good at their jobs. Every time you write an email or make a call in one of these roles, approach it as if you are the best publicist, agent, or merchandiser in the world and think about what a professional in that field would do. Then do it. This will help people take you professionally.
#5 Read Up
Being well read will do more for you then make you look cool while schmoozing industry types. Watching the industry, keeping tabs on changes, and more will allow you to make the best strategic decisions possible, and managing a band or being in one is all about strategic decisions, as I’m sure you know. Websites like Hypebot and Billboard Biz are good starting points.
The rest of the post is well worth checking out. You can see it here.

Faced with a downturn in download sales, Apple is now seeking exclusives and additional content from artists in order for iTunes to retain its edge on various competitors. Using the Beyonce exclusive from her fifth album that was released in December as an example, Apple hopes to convince other artists that providing iTunes with a window of exclusivity can be an advantage for all concerned.

Although Beyonce's album became a big hit and was the fastest selling album in iTunes history, she suffered a backlash as a result of the exclusive when retail giants Target and Amazon.com refused to carry it. Few artists are able to sustain a retail boycott of any kind, which makes providing Apple with an exclusive all the more dubious. Plus, is this really serving the artist's fans in the long run? You really don't want your fans to jump through hoops to get your latest release.

Streaming is clearly picking up steam and iTunes, which has around 80% of the download market in the US, wants to maintain sales for as long as possible. That said, using Beyonce as an example is a little like saying you get a good ride in a Rolls Royce, when few of us ever get to experience it.

There seems to be little incentive in giving iTunes an exclusive, and a lot to lose if you do. Maybe it would be better if Apple concentrated more on iTunes Radio instead.