While YouTube is still the king of the online music stream, it looks like Spotify is gaining ground, a development that might mean more money to songwriters, artists, labels and publishers alike.

According to Billboard, the on-demand streaming marketplace has risen by 50% in 2014. This means that Spotify has delivered about 413 million streams this year so far as compared to 274 million in 2013.

Spotify's market share in the streaming market has gone from 22% to 33% this year while YouTube's has decreased from 66% to 58%. That said, 91% of all on-demand streaming traffic is from these two services.

One of the more interesting aspects of YouTube's market share is that it can fluctuate greatly depending upon the posting of a hot new video. For instance, there was a large spike in activity in August when Taylor Swift's "Shake It Off" and Nicki Manaj's "Anaconda" were released. "In fact, Anaconda" now holds the Vevo record for most views in 24 hours at 19.6 global views.

With the introduction of YouTube's new Music Key streaming service next year, you have to wonder whether the market share numbers will increase at Spotify's expense instead of the current trend. Then again, there's always Apple Beats that can change the equation yet another way when it's released in full in 2015.

One things for sure, the music streaming market will continue to be one of the most interesting aspects of the music business next year.

What's The Most Important Social Network For An Artist? 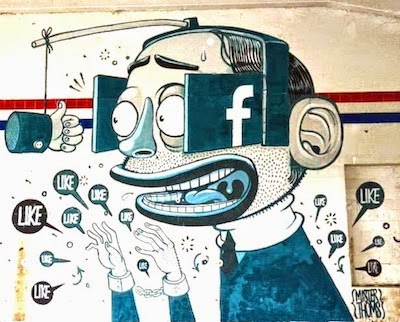 When it comes to social networks, most artist's have the same question - which is the best one? That's a difficult one to answer since our social world is such a moving target as technology and tastes constantly evolve. That said, Jacob Tell of the digital services company Oniracom has some answers in this excerpt from my Music 4.0: A Survival Guide For Making Music In The Internet Age guidebook. Here's what Jacob had to say.


How have things changed since we talked for the last version of this book?
Actually the techniques are somewhat the same but the platforms keep changing. There are new ways for artists to get content out to the world, but that content is now two fold. Where before the content was mainly generated by the band or artist directly in regards to a new single or behind the scenes video or something similar, now we’re seeing more user generated content as the other half of the story.

Some of our most effective marketing is based around user-generated content where we might grab hashtags from Instagram photos, throw them on a map based on geo-location, and then visualize the fanbase across a geographic region that’s posting content around a certain campaign. A good example of that is something we did for Thirty Seconds To Mars called MarsIsComing.com. You can see hundreds of Instagram, Twitter pics and Vine videos from all over the world on a map. This has become an extension of community and it really helps the artists connect directly with their fans on another level.

What’s more important today - Vine or Instagram?
For a minute there we really thought that Vine was going to be the most amazing new platform. There was something needed in the short form video space and Vine did the trick. I think the format is a winner, and being that they’re owned by Twitter, they have a built-in audience right off the bat. That said, because that there are so many Instagram users, as soon as it released its video feature to catch up to Vine, the Vine user numbers started to drag. Now you have this split of really hard-core users between the two, with another small contingent on Viddy. The Instagram people say, “I’m already on it and since it pastes to my Facebook wall I’m just going to stay there.”

We always tell our artists that we don’t want them to do things that feel like homework, so if they’re already on Instagram, we don’t want them to try to learn something else and have yet another social network to track. I don’t think Vine is going away, but I think the convenience factor of having both photo and video on Instagram is a huge benefit for artists and managers who have too much to manage already.

How important is Google+?
You ask most people and they’ll sort of scoff at Google+, but I’m one of the outliers who really believes in it as a centralized platform. There aren’t as many active users or bands or brands on it yet, but those numbers are definitely increasing, and there’s a lot of content available if you’re following the right sector. I get a lot of new information and news that way personally. There are also a lot of influencers in the music and tech space that I follow on G+, and I find that its mobile and tablet interfaces are very compelling.

The fact that everyone in the business world is now moving to the Google Apps ecosystem and Google+ directly integrates with that is important. And Google Hangouts have been one of the most vital collaborative tools to our business. We started those with managers and artists as much to collaborate with them on as to show them the technology and how easy it is to use, so you can plant that seed of “You can do this with your fans.”

What’s the most important social network to an artist right now?
Personally I think visual content wins, so I’d say Instagram and YouTube. YouTube is ubiquitous across every device, the content is instantly searchable and available, and within seconds it can tell the story of a brand or an artist.

When it comes to the other networks though, personally I’m a big Twitter guy. I’m not so much into the Facebook and Google+ world on a day to day basis because of the obligation to connect. For an artist with a busy life, Twitter’s great because it’s more of a broadcast technology yet you can still engage with people and stay authentic and true to your brand. There’s a little bit more of a wall there so that offers some protection if that’s needed.

What’s the first thing you do with a new client?
We have a whole process that we call DNA that stands for discover, engage and advance. The first step is discovery, which means that we listen, since it’s all about hearing the client’s story. Marketing is all about story telling so I get the client to tell me theirs. They may not even think they have a story but they always do, even if we might have to coax some of that information out sometimes.

Once we understand the story, then we dive into goals. How to achieve those goals is really based on audience demographic. Without a fanbase you’re not going to monetize and sustain a business, so you have to proactively listen back to your audience. It’s a game of give and take. We’ve had a lot of success in listening to audiences because we ourselves are indeed fans of art, music and culture, so that really makes it easy because we’re so passionate about the subjects. That means we can explain why it might be necessary to do something that maybe the artist isn’t so comfortable with in the social space.

Do you do the social day by day with them? How much do you ask them to engage?
It’s a case by case basis, but if we’re talking about an artist on tour, we absolutely want either the artist themselves or someone with day to day access to them like a tour manager, publicist or assistant to be posting content. Anything that’s more from management like an announcement of a tour cycle, album cycle or product release, we become more hands-on, crafting the copy to make sure that it matches the brand and voice and goals.

With wireless bandwidth and speeds enabling us to engage with audio and video content from anywhere we are, it should be easer than ever for an artist to be able to engage with their fanbase.


You can find out more about Jacob and Oniracom at oniracom.com."

The Cost Of Breaking A Major Label Act

The latest IFPI (International Federation of the Phonograph Industry - boy, is that name outdated) recently came out with a report about the state of the music industry and a few of the elements that were analyzed included how much the major labels spent on developing new acts.

Here are some interesting figures.
Major labels spent $4.6 billion dollars this year on A&R and marketing their acts, and 27% of the major label's revenue went to A&R. According to the IFPI, this is greater than what the computer, pharmacology and biology industries spend on R&D.

Finally, there are 7,500 artists signed to major labels around the world. One in 5 is a new signing.

Most artists today really like the DIY aspect of building their career, but there's nothing like the monetary clout of a large label.

Merch has always been a major revenue source for an artist, but it turns out that once an item becomes "vintage" it can also be considered art too. Take for example the case of old artist t-shirts. Believe it or not, there's a huge market for vintage t's, with some costing as much as $10,000.

VH1.com has a great gallery of the most expensive shirts that go from an original Iron Maiden 1982 Number of the Beast tour shirt for $812 to a Who tour staff shirt at $3,000 to a Run DMC My Addidas shirt at $13,000 to Kurt Cobain's Sonic Youth shirt at more than $14k.

Now is probably a good time to look in your closet to see what you haven't worn in ages. It might buy you a very nice vacation.

Check out the gallery here. Thanks to my buddy Jesse Siemanis for the heads up.

If you're an artist, much of your life revolves around YouTube these days. It's not only the #1 way that consumers discover new music online, but it's also the place where most people consume their music as well. Recently the service posted some very impressive new numbers.

MORE:
Mobile and Devices
Content ID
Now with the introduction of Music Key, it looks like these numbers can only grow. It will be interesting to see what they look like next year at this time.