When Wu-Tang Clan announced recently that they’d be pressing only one copy of their upcoming album The Wu - Once Upon A Time In Shaolin and would put it up for auction after a museum listening tour, the general thought of music industry insiders was that this was a giant publicity stunt.

Well, stunt it is that’s working beautifully in raising the group's visibility, but it’s also an excellent case study in one of the principles of the Economic of Free, a theory put forth a few years ago in Chris Anderson’s book called Free: The Future of a Radical Price. Whether they know it or not, Wu-Tang is proving that the little understood second principle of the concept works like a charm.


While Anderson doesn’t outline the concept of the Economics of Free (E of F) specifically like I’m going to in his article, breaking it down into the following two principles makes it easy to grasp and see in action. Let’s take a brief review in how E of F applies to music sales in the world we live in today.

The Two Kinds of Products
First understand that the typical artist has two kinds of products; infinite and scarce. Typical infinite products are music or videos in a digital form, which cost nothing to reproduce. Scarce products include tickets to live shows (not very scarce, but more so than digital music), custom CDs and CD box sets, signed merchandise, exclusive access to musicians, backstage passes, private concerts, and anything else that has a limited supply.

Giving Some Away
Keeping that in mind, Principle #1 is “Give some or all of your infinite products away for free in order to charge for the more scarce ones.” We see this all over the web every day in the form of the many “freemiums” that are offered. For instance, sign up for the free tier of Pandora or Spotify, and if you like it, you can buy up to the next level of service that makes it ad-free with better audio quality.

Instead of using money, many Principle #1 transactions revolve around social currency, like giving away a free download or exclusive content in exchange for an email address. That allows the record label, artist or band to continually offer other products that you might buy later that potentially carry a higher profit margin. Read more of Forbes.

Which Decade Had The Worst Music? 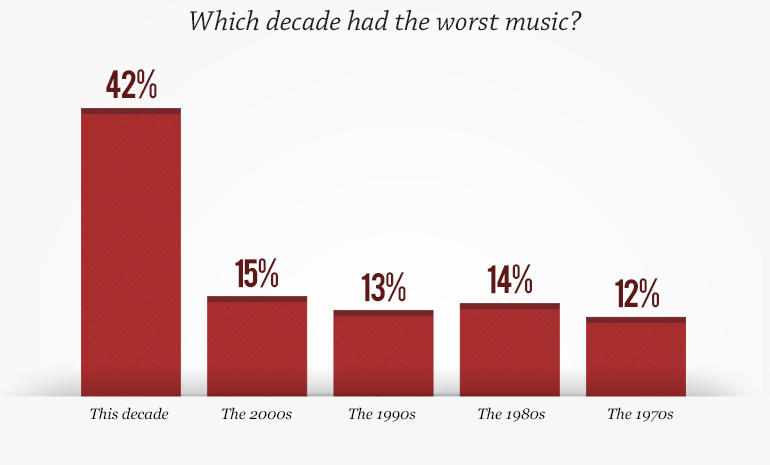 Yesterday I posted a piece of the latest CBS/Vanity fair poll on music in the United States. Here's another section from the same poll, this time about the decade that most people think as had the worst music.

It's difficult to say exactly why people feel this way (which is even shared by younger listening audience members), but I suspect it might have something to do with the rise of EDM influenced songs which center more around the beat and a hook than melody and lyrics.

It would be really interesting to see how this figures are broken out by age, genre tastes, and location.
Posted by Bobby Owsinski at 9:30 PM 2 comments:

How People Listen To Their Music

CBS and Vanity Fair recently conducted a survey about music consumption in the United States that's extremely detailed and interesting. I'll be providing information from that report from time to time in upcoming posts, but let's start off with how most people listen to music.

As you can see from the chart below, the radio is still the way that most people get their music at 49%, followed by a digital music service way behind at 17%.

People still like to listen to songs in their library from a phone or digital player at 15%, 9% still use a CD player, 6% from their computer, and 1% from a record player.

That last figure is surprising in that it's as high as it is. Vinyl has made a comeback, but finding the equipment to play it on isn't all that easy these days. Also, the fact that so many still use CDs shows that the format has a great deal of life left in it as well.

Keeping The Cannibal Away: The 3 Biggest Issues Facing The Upcoming YouTube Streaming Service

There’s been a lot of rumblings from Googleland again about the new YouTube streaming service that it’s preparing to introduce, with most of more recent ones being about how Google is struggling with getting everything just right before it launches. There’s good reason for the company to be so cautious as there’s a lot riding on the decisions that are being made right now, at least in the music sphere.

The launch of the new YouTube streaming service has actually been speculated for months, and if I didn’t actually know people who have seen it for themselves, it might be easy to think of the launch whispers as a just a diversion to throw off the competition, a nice rumor to scare the pants off of Spotify, Pandora and Beats Music. That said, all indications are that the service is being crafted to be a serious contender in the music streaming space, but the fact of the matter is that there are three major issues facing Google here, and none of them trivial.

The biggest question is how to top something that’s doing so well already under its own momentum. YouTube is already the largest music discovery engine online, beating all competitors by a large margin, according to Nielson’s Music 360 Report. You don’t hear a lot of complaints or “if only it did” comments from its users, as most are quite content with the on-demand access that they have now. Oh, and it’s free too. How do you surpass that without becoming just another service groveling for some of Pandora or Spotify’s marketshare?

By delivering picture along with the audio, that’s how, which raises the second question of how Google gets around delivering that picture without it resembling a late night at a Karaoke bar. Word has it that the company is looking into licensing different types of artwork to play behind the music; some static and some dynamic. Ideally the graphics would have at least something to do with the artist, but many videos today get by just fine with abstract graphic designs. Read more on Forbes.
Posted by Bobby Owsinski at 9:30 PM No comments:

4 Tips To Optimize Your Videos For Mobile

One of the things that we have to be aware of when making a video these days is how it will play on a mobile device. Here's an excerpt from the YouTube chapter of my Social Media Promotion For Musicians book that provides 4 tips to make sure that your video is effective on a phone or tablet.


"Mobile viewers watch videos a lot longer than they do on their desktops. In order to maintain that attention, it’s important to observe the following:

1. Avoid using tiny text. Make sure that any text you use is readable on any screen that the video might be viewed on, especially a smartphone.

2. Make sure the audio is clear. Great audio is always a plus, but even more so when viewing on a phone. Remember that the speakers are small, so you're not going to hear many of the low frequencies, but that's okay as long as everything is intelligible. Also remember that there's always a lot of ambient noise around a phone if the user isn’t wearing earbuds, so make sure that the audio is able to cut through it.

4. Test the video on your own phone before you upload it. What good is the video if it doesn't get the point across? The only way you'll know for sure is if you test it, and your personal phone is a great place to start.

These are all good tips to keep in mind the next time you create a video. Remember that it's more than likely that a great number of your viewers will now be watching on their phone, so compensate for the small screen right from the beginning.

People Watch Longer On Tablets
While most people watch at least a couple of YouTube videos on their laptop or desktop during the day, it turns out that tablet users actually have the longest video engagement. Video distributor Ooyala did a study that determined that tablet users watched 28 percent longer than the desktop average. They also found that tablet viewers are more than twice as likely to finish a video than on a desktop, which was about 30 percent higher than that of mobile devices.

The study also found that desktops and laptops are more likely to be used for short video clips, whereas videos that are 10 minutes or longer make up 30 percent of the hours watched on mobile devices, 42 percent on tablets, and nearly 75 percent on connected TV devices and game consoles."

To read additional excerpts from Social Media Promotion For Musicians or my other books, go to the excerpts section of bobbyowsinski.com. Also check out my series of social media courses on Lynda.com for free for 7 days.

The bottom line is, if you make a video, be sure that it plays well on a tablet.
Posted by Bobby Owsinski at 9:30 PM No comments: