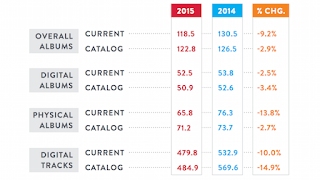 Nielsen's latest music report is out and, as always, it's very revealing about what we listen to in the U.S. Perhaps it's biggest revelation is that, for the first time, old music (known as catalog sales) outsold new music in 2015.

Catalog is defined as a music release that's more than 18 months old. Of course, we're also talking about music sales and not streams, which is an entirely different matter.

That said, sales of older music came despite the huge sales numbers for Adele's giant 25 album, which was only available for sale and not as a stream. The album went on to sell 7.2 million copies in the last 6 weeks of 2015 in the U.S. alone.

But lest you think that CDs are completely dead, 2015 saw 125 million of them sold for about $1.52 billion in revenue, which is still a huge amount of money.

And that's only the CDs that were tallied by Soundscan. CDs sold privately on events and online aren't counted.

Beyond that, there were 103 million digital albums downloaded, and 11.9 million vinyl albums sold.

As you can see on the chart on the left, catalog music leads over new music in all facets of sales. I guess the "Long Tail Theory" must be working.