Where Are People Buying Their Music? 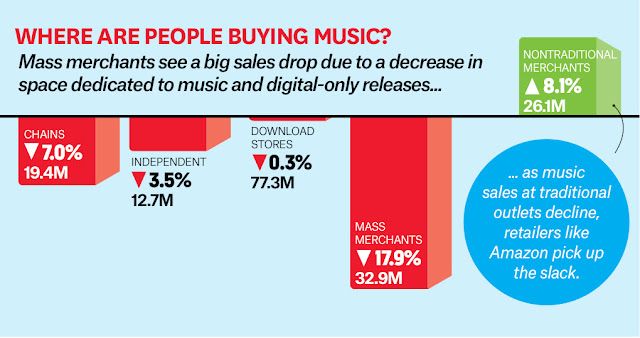 There's still a lot of physical music product being sold despite what you might read, but the places that people are buying it is changing.

According to Soundscan, retail stores are selling less and less, but some of the slack is being taken up by non-traditional retailers like Amazon, which grew 8%.

Overall, CD sales are down 10%, but still sold a healthy 82.6 million, and vinyl sales still continue to surge, up 32% to 8 million sales.

Physical product is far from dead, but it's certainly decreasing at a rapid rate.

Something that people might think about is whether or not the across-the-board decline is really all decline or if maybe a lot more music is going direct from band to fan now, bypassing soundscan.

We've sold our souls since Napster and the digital devil strikes again.