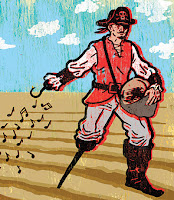 If you've read this blog for any length of time, or my Music 3.0 Internet music guidebook, you know that my mantra is "Your music is your marketing." I've advocated that you never worry about piracy, and should in fact embrace it, since that's the single best way for people to become aware of your music. In fact, sales will grow precisely because your music was interesting enough to be freely shared.

This was born out by the latest studies by the NPD Group and IFPI, as shown in this recent post. Now a new study from the EU has concluded that "digital piracy should not be viewed as a growing concern for copyright holders in the digital era."

Digital Music Consumption On The Interent: Evidence from Clickstream Data is a 40 page study full of statistical detail by the EU's Information Society Unit that used data from 5000 Internet users from the EU's five largest countries: France, Germany, Italy, Spain and the UK. While most of the data pertains to Europe, the conclusions are the same as previous studies.

No artist, songwriter or copyright owner wants their property stolen, but an odd quirk of music online shows that the more it's available for free, the more it sells. A number of artists have found that when they take the free music down from their website, their iTunes sales fall. Put it back up and the sales rise. You can look at it loosely like radio, where a song is heard for free, but it exposes it to people who might want to buy it.

It used to be that you'd buy the song or album because you wanted the convenience of hearing it when you wanted, instead of waiting for it to be played on the radio. Today you can find most songs instantly anywhere online, so the convenience factor is gone if you're into streaming. That said, some fans want to pay simply as a way to support an artist. Then again, it's been found that the biggest sharers of music are also the ones that buy the most.

Regardless, unless your music is heard in some way, it's invisible. That's why it doesn't matter how someone hears your music, just that they hear it.