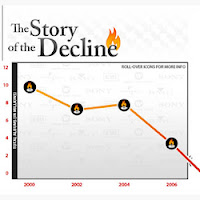 I'm a big fan of Bob Lefsetz, the industry gadfly who tells it like it is in his newsletter. Bob is never afraid to call an exec or an artist out if he thinks they deserve it. He's not on anyone's payroll. He's an insider with access simply because he's trusted for speaking his mind, yet he's still an outsider. As much as the industry denies it, the movers and shakers still care what he thinks.

Recently he wrote a post called "Income Inequality Killed The Music Business" that pretty much nails the current state of the music business from a macro level. If your an artist, you're probably not thinking about what he's presenting, but you need to be. In fact, if you're in the business on any level expect VP or higher, you're not thinking about these issues, probably because you don't have the information to see the forest from the trees. That's why you have to read this excerpt.

By the way, you can read the entire post and subscribe to Bob's newsletter at lefsetz.com.
---------------------
"Twenty million a year. There are bankers and CEOs who make this much each and every year. This is not U2, going on the road, raping and pillaging in stadiums for years. If U2 went out again, they'd have trouble selling tickets. Hell, they had trouble moving tickets for the last leg of their tour. They played it out, they mined the depths, they've got to let it lie fallow. Costs for the U2 360 tour were prohibitive. How much did each member of U2 end up with at the end? I'd say no way a hundred million, but let's just start there, let's go with that number. There are bankers and CEOs pulling down nearly a hundred million dollars a year. It took U2 years to achieve this goal, to make this amount. They're spent, but the bankers and CEOs are still rolling in dough. And the U2 360 tour was the biggest in history!

So you're graduating from college, playing in a band all the time you were in school, and you ask yourself, should I give music a go or get an MBA, go to work for Goldman Sachs?

Now it's no longer the seventies. Take a year or two off and you miss the bus. You've got to start now. There's only one band making mucho coin, but thousands of bankers and CEOs getting rich. Odds are better if you become a CEO.

Or you could go into tech. Mark Zuckerberg is not the only young techie worth millions. There's that guy running Groupon and the guy running Zynga, and so many of the worker bees end up making millions too, that's what all the employees at Facebook are counting on. Do you think you can make millions as an A&R guy?

1. The Labels
Used to be running a label paid well, but it was mostly about the music, the lifestyle. Then, with the advent of MTV and the CD, suddenly Tommy Mottola [ed.- the former president of Sony Music] was far richer than the acts. And Tommy and his ilk started hanging with other rich people in the Hamptons, they felt entitled to their wealth. Such that when Napster blew a hole in the paradigm, everybody was sacrificed but the top guy. The people running the labels are still as well paid as they were before Napster, before the recession. They're keeping up with the joneses, they're in charge, everybody's expendable but them. As for those people still working at the label...they're thrilled to have a job. Glad to be slaves on the plantation.

And everything is driven by the bottom line. Hell, Warner is privately held, Sony and Universal are parts of giant corporations. Theoretically, they could invest in the future, they could leave money on the table, but they won't. The execs want that money in their pockets. And they don't really care about the label anyway, they don't own it. As long as they get paid for their multi-year contracts, they're cool.

Music is not the focus, money is. It's a change in our entire culture, why should the label heads be any different. They've fought their way to the top, the top are handsomely rewarded, usually with double digit million incomes. If the guy running some industrial firm makes this much money, shouldn't they, providing entertainment for the masses?

2. The Acts
The best and the brightest don't go into music. It just doesn't pay. The only people pursuing music as a career are the lower classes, who are struggling to get on top. As a result, they'll do whatever it takes to make it, they'll whore themselves out when they get there, it's all about the bucks.

Ergo the crazy endorsement and product deals. The acts feel they're entitled to the money. Look at all the other half as famous people, they're loaded, so the acts feel they should be loaded too. And the corporations are willing to lay cash on the acts, because the corporations have money to burn, their taxes have been lowered, check the statistics, they're sitting on huge cash reserves. The CEOs can use this cash to hang with stars. This is how the Gaddafi family got household name talent to play their shindigs. This is how that guy who made bad body armor got the biggest stars in the world to play his son's bar mitzvah. Used to be no CEO could afford it. But now, they can. And the acts see no reason not to take it. Hell, they don't want to fly commercial, they too want to vacation in St. Barth's. Music has become about the money. But the odds are low and so is the money, so you get the desperate, willing to do anything to make it, kind of like the athletes. Those NBA players are not model citizens, but they're essentially one-dimensional, it's comes down to their playing ability, their performance on the court. But we believe musicians are their music, that they're three-dimensional, that we can believe in them, but we can't.

a. Artist Development
Few of the classic acts did their best work on their first records. But labels allowed them to marinate and mature, to develop. Now the label says no, because the executive wants his money up front. There is no long term. And that's why there's no "Hotel California." Nobody peaks on their fifth album, there usually isn't even a fifth album.

b. Writing Your Own Material
This is what blew up the rock acts. This is what made us believe in them. Now, material is written by committee. If the label's gonna take a risk, it wants insurance. It doesn't want the act blowing half a million dollars on something that won't sell. So inherently, we've got less believable stuff. Sure, there will always be music, but the heyday of the music business was when the rock star was responsible for everything and was beholden to no one. Ain't that a laugh.

3. Concerts
Sure, there was scalping decades back, but tickets were not the equivalent of a thousand bucks. Because no one had a thousand bucks to blow on a ticket. But the bankers and CEOs do. So the hoi polloi can't get a good ticket. And since the acts need to make as much money as they can, and recorded music revenue is down, the price for all tickets is heavily inflated. Therefore, people go less, they just can't afford it. And they take no risks on new acts, not at these prices. And what are the odds the new acts are good? They're just moneygrubbers like the rest of them.

Conclusion
Meanwhile, everybody fighting his way up the food chain is spreading disinformation, saying his hands are tied. And when finally nailed down, they utter some b.s. about just trying to feed their family. But with the money they've already made, they can feed their children's children's children.

The incentive to be an artist, to make great, lasting music, has been blown away. Used to be, a working act could have a middle class lifestyle and maybe some future performing rights income and other royalties. Now, you're either starving or fighting to hold on to what you've got so the bankers will hire you for a private. It's desperation all the time.

Back when we were all in it together, when the gap between rich and poor was smaller, it was reasonable to be a musical artist. One took a chance expressing himself. You could always give up and go to law school, find a place for yourself on the middle class spectrum. But now if you're not on your way to riches immediately, you're boxed out. Which is why parents push their kids to get into the Ivies, why teenagers are creating websites and apps. They want to get in on the ground floor. Used to be people picked up guitars. Now they flock to their computers.

But what if a label exec couldn't make millions, whether it be as a result of taxes or the demands of employees and acts. What if CEOs and bankers made this same amount. Hell, what if forty acts could make the same amount of money as a CEO or banker, and there were another hundred who were solidly middle class, and being so meant you could live comfortably and pay the bills?

Then you'd have the sixties and seventies all over again. Because this is the way it was."

Take this post to heart. Bob really nailed it. Once again, you can subscribe to his wonderfully informative newsletter at lefsetz.com.

I think this is a great perspective. While the technological advance of P2P sharing has done more to hurt music revenue (and perhaps quality) than anything else, it's true that increased income disparity has negative effects in many corners of society.

We've reached a point where the experience of music is free for many people (especially the young and non-rich) and 100K for the rich bar-mitzvah and sweet 16 parents.

This is not healthy.

My personal solution would be an ISP levy that would distribute income from music more evenly and encourage artists to build careers around albums, not Sprite commercials.

I agree with everything he said and it makes me sad. I know things will never be the way they used to be ever again.

The LOVE (Lust?) of money has destroyed the whole fabric of society.

When "businessmen" without any knowledge of, much less love for or interest in music took over the music industry in the 80's, it was the beginning of the end.

The Radio Star wasn't the only thing MTV killed...