Help Your Fans Help You Market 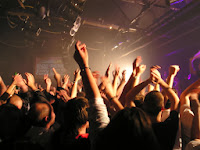 Social media can be such an instant communicator that it allows people to immediately share the good time their having with not only their friends, but the world. The problem is that artists and bands don't often take advantage of this during a show. Consider the following ideas for your next gig.
A live gig is an underutilized tool that with a little additional effort can turn into a social marketing event with the help of your audience.