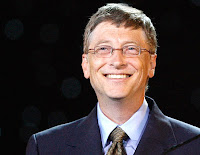 It was recently announced that Microsoft co-founder Bill Gates is getting into the music business, which is an interesting move, although not in the way you might think.

Gates owns Corbis, which is a photo, film, video and art masterpiece library service, which is taking the next step by getting into the music licensing business by launching GreenLight Music with songs from the four largest music publishers.

What the service will do is allow film and video customers to purchase the license for a wide variety of songs available from a library of about a million strong, but in many cases the users actually have to bid on the song and negotiate with the publishers for a price instead of doing a clean purchase online.

One of the first deals that GreenLight did was to license The Monkees' "Daydream Believer" for $1,875 so it could be used during a corporate meeting. Just about any songwriter or publisher will take that kind of dough any day of the week.

The interesting twist is that GreenLight doesn't actually control the copyright to any of the songs in its library, it's merely a middleman. Since producers and editors are already used to checking out Corbis for visual material, it's a no brainer to offer the audio as well.

You may or may not like Microsoft, but no one ever said that Bill Gates isn't one smart guy. After all, he is worth about $56 billion. His action does show that someone actually is bullish on the business thriving in the future, as least on the publishing side of things.