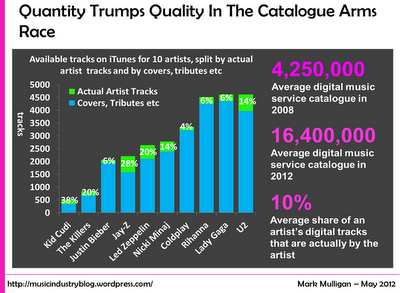 These days every music service from iTunes to Spotify is trying to one up each other with a power number - the number of songs in their catalog. iTunes now claims to be up to 20 million songs, Spotify 15 million, Amazon MP3 16 million, and on and on. But as music industry consultant Mark Mulligan cites in a recent blog post (The Long Tail Eats Itself), these numbers are incredibly inflated.

It turns out that most of the songs are merely covers of popular songs. Lady Gaga, U2, Coldplay? On average about 10% of their songs are really the artist's version, the rest being covers, parodies, and duplicate cuts from remastered albums, EPs, and greatest hit compilations = filler, if you will. Many of the covers are meant to sound identical to the originals, while many are truly other artist's interpretations of the songs (which is cool), but most people just want to hear the original track.

Here are some other figures that might make you think a bit differently about the breadth of a catalog (these figures are a bit old, bit you'll get the picture):
What all this means is that even though you may have access to 20 million tracks, that doesn't mean that you'll want to hear them all. In fact, it probably means you'll only want to hear less than 1% of them. Still, that's probably more than you'll ever hear in your lifetime, but too much choice just means complexity of finding what you really want.

It would be great if there was some metadata attached to the song that could sort this mess out, i.e. "original version," "cover," "greatest hits package," etc. Don't hold your breath on that one.